Ad hoc
A temporary committee, set up for a specific purpose; it ends when its work ends.

Adopt, adopt a report
Accept a motion; accept a report, including actions described in the report.

Amendment
A motion that proposes a minor change to a motion without changing the intent.

Bylaws
The rules that apply to operation of your local union, as approved by CUPE National President’s Office.

Caucus
A meeting of a sub-group of members to discuss and plan an issue or motion.

The person who leads a meeting, also known as a Presiding Officer.

Divide the question
A motion to separate a main motion and an amendment; if approved, the meeting will vote
on the motion and amendment separately.

Floor, ‘to have the floor’
A member speaks at a meeting; the chair recognizes a member, which gives them the right to speak.

Lay on the table
A motion to put aside (or table), a main motion until a later, unknown time.

Minutes (of a meeting)
A written record of what happened at a meeting and what the meeting decided.

Motion
A formal proposal that asks members at a meeting to decide on a certain action; it is also called ‘the question’.

Move
How a member launches a motion at a meeting: “I move that…”

Notice of meeting
An official, written announcement that provides union members with an agenda for an upcoming meeting.

Notice of motion
An official announcement that describes a major issue the local wants members to debate and discuss at an upcoming meeting.

On the floor
The time when a motion is being discussed and debated at a meeting.

The items on an agenda.

Precedence of motions (order of precedence)
The ranking of motions from highest to lowest; this determines the order in which the chair must deal with motions.

Put the question
The chair asks members to vote now on a motion.

Quorum
The number of members who must be present (in the room) for the meeting to be valid and to proceed.

Report
A formal communication to a meeting from a committee or officer.

Rules of order
Written rules apply to how the local union conducts meetings.

Second a motion
A member who did not launch a motion states their support for having the motion considered.

Seconder
The member who seconds a motion.

Standing committee
A permanent committee of the local; it holds regular meetings.

The chair reads the motion to the meeting before discussion and again before the vote.

Suspend the rules
A meeting decides by a 2/3 vote to stop the meeting to deal with urgent business.

Tile the doors
Closing the doors to prevent anyone from coming in or leaving the room until a vote is complete.

Undebatable
No debate is allowed on certain kinds of motions.

Withdraw a motion
A member who moved a motion requests that the meeting no longer consider it. Once the chair has stated the motion aloud, only a majority vote can withdraw the motion.

Where To Find Us

Where To Find Us 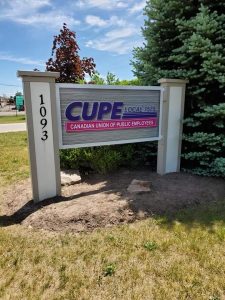